“An Academic Play in One Act”

[Four scholars stare at their computers. They enter the virtual stage through Skype. It’s a global conversation crossing 3,5 continents, 4 countries, and 3 time zones: it’s the middle of the night in one place, early morning in another, midday somewhere else. All four are worn out by the heat of the day, overdue deadlines, and exhaustion from working in murky archives. They nod or wave at their screens. One is looking for a power cord. Eventually, they’re all set up.]

Simone: … so, next on our agenda is our blog series on “Hazardous Hope”… Hmm… The oil-ridden rainforests of Ecuador might be a good place to start our conversation. It truly appears to be a hazardous and rather dispirited place, Maxl…

Maxl: Yes, it already looks bad enough at first sight, but if you dig deeper, it’s a real social and environmental disaster. Decades of ruthless oil exploitation by private and public companies, together with large-scale settler colonization have created a desperate situation for the local population. The contamination has caused the highest cancer rate in the country, and massive deforestation and high unemployment rates present almost insuperable challenges to indigenous and settler communities. The locals are left in poverty in a degraded environment, while the profits are distributed elsewhere.

Ayushi: What you describe is very similar to what’s happening at the Alang shipbreaking yards in Gujarat. One could easily frame it as a toxic wasteland where foreign ships are first dumped, and then broken down by hapless migrant workers from all over India. In the process, they and their environment are exposed to multiple hazards. Here, it seems no one dares to speak of hope—it was lost long ago. 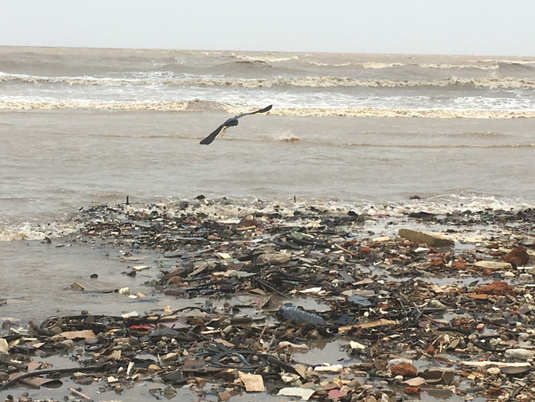 Jonas: Oh, you two sound so dreary. What you describe may be true, but it can’t be the whole picture! It’s just the same story, no matter where you look: toxic waste illegally dumped in German forests, insects dying, seabirds choking on plastics, starving polar bears. It seems like everything is in decline. I agree with Tina Adcock that “as critical, hopeful environmental historians, we must acknowledge that damage at the same time that we seek to set it aright.”

Simone: This is very similar to what Christof Mauch proposed with his concept of “slow hope” or what NICHE explored in its series Hope and Environmental History. We’re facing a demand for new narratives—positive or at least hopeful ones. Narratives that leave the beaten path of declensionism and show that matters truly are “more complicated than that.”

And language matters tremendously in that quest to communicate our findings in a “more hopeful key” as William Cronon remarked. Christof explores this idea in greater depth with slow hope. In the text, I sent you, he writes “Given humanity’s vast power to manipulate our earth’s ecosystems in destructive ways—illustrated with the idea of living in the Anthropocene—we might also be able to imagine having a more beneficial impact and learn from our mistakes over the next centuries.” In order to achieve such a positive turn, language and a new set of more hopeful narratives will be essential. 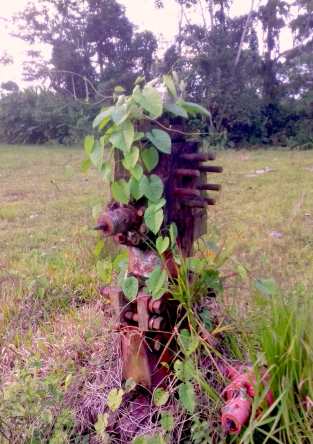 Maxl: Slow hope sounds wonderful—as long as we are sitting here in our comfortable offices in Munich. We might have the time and resources to wait for slow hope to come and do its duty. But while we were all carrying out our fieldwork, we saw people living in or close to hazardous sites—people who are suffering and getting sick today. They should have hope for quicker solutions too, don’t you think?

Jonas: Well, this is, I think, one of the trickiest questions we encountered when trying to write hopeful stories. When we came up with the idea of “hazardous hope” for this series, it raised a whole new set of questions …

Ayushi: And inspirations. It got me thinking about reasons for hope. And hope for whom? Is it even possible to have hope in a hazardous environment? In the end, I keep returning to how it makes me feel to write about hope. As researchers, we all have hope that our work will have some kind of impact. But I also have to wonder if it is hazardous for us personally and professionally to emphasize hope? Would it seem like we were ignoring pressing problems?

Simone: Writing a hopeful story does not necessarily mean denying the negative consequences we encounter in our environmental histories. Rather, it counterbalances them so that the whole story is not just about decline. Hazardous hope is an attempt to provide audiences with a version of the story that comes close to reality by also highlighting the positive changes that we witness during our research … In any case, it definitely helps me keep my sanity! When I talk about my research project on the hazardous waste trade, people often respond with, “Oh … but in the evening, you do something nice, right?” Certainly, I struggle to face such dreadful topics 24/7, so in the end, what really helps me to find a balance is having faith in hazardous hope. 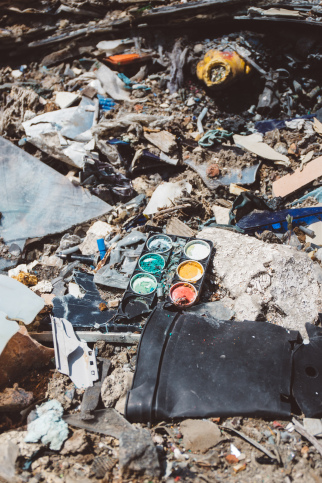 Jonas: Yes, for me, thinking about hazardous hope means that things are never just black or white—they can be both unsettling and comforting. Humanity is not necessarily set on a path of ultimate destruction, and we must reflect this in the narratives we construct. Even in the most toxic surroundings, there is hope: for instance, in the form of small bacteria that have evolved to digest plastic. In my contribution to the blog series, I explore how these microorganisms might help us confront one of the biggest environmental threats: plastic pollution.

Maxl: The idea of hazardous hope might indeed be able to capture that ambiguity. It seems to be a contradiction, but there is always a chance that things will turn out well, and this notion is expressed in the etymology of the concept. The word hazard(ous), from the Old French hasart, used to refer to a game of dice. This playful origin reveals the ambiguous dimension that the hazardous adds to our hopes: it means having a chance—and that chance might involve loss or suffering harm. However, with every obstacle comes the chance to overcome it.

Jonas: You’re right, we have to take chances. Besides, we do not even know how slow hope works. Often, positive impacts are only felt decades or even centuries later. Nikola Tesla invented the first electric induction motor in 1887—today it could be a means to cut down the world’s CO2 emissions. Maybe today’s inventions will be tomorrow’s solutions.

Ayushi: I agree, but I don’t think we should limit ourselves to just hoping for scientific inventions. In putting our blog series together, we have encountered instances of real progress. In my case study, I highlight how hope was finally restored in the international judiciary when violators were heavily penalized for exporting hazardous waste to non-OECD countries. Change wasn’t immediate, but it did occur.

Simone: And in my example, a PR company is striving to combat plastic pollution in the oceans by founding its own country, the Trash Isles. This makes me think about how we can integrate creative outlets and artists into our scientific works.

Jonas: I’m still not sure I’m completely convinced of the benefits of hopeful stories though. In the past, the belief that something will improve in the future has prevented change from happening.

Simone: That’s also true. A good example of this is how the technological fix has prevented change in the global waste economy. The need to export waste arose because over decades, communities in industrial countries ignored their waste management problems, even though waste levels were rising. Instead of acting, they clung to the belief, the hope, that there would be a technical solution to the problem eventually. Initially, people were right to hope for a technological fix. Technology has progressed: incinerators are more efficient, filters are more effective … but this hope has prevented people from even considering changing their behavior of PRODUCING so much waste in the first place. 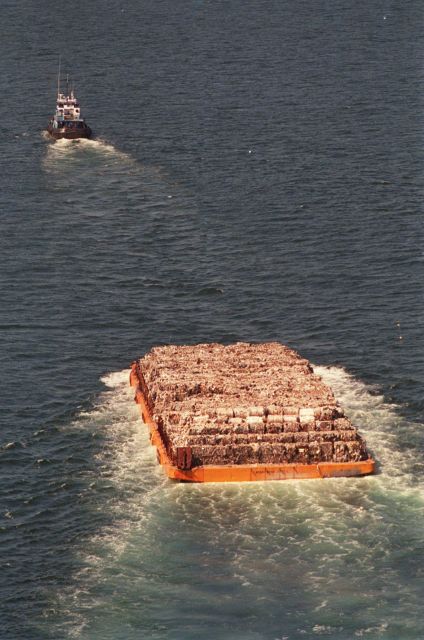 The barge filled with Islip garbage is tugged home on May 16, 1987. Photo Credit: Newsday / Dan Sheehan

Ayushi: Still, I don’t want to give up on hope. We have positive stories to tell about the global waste economy and I think we should tell them.

Maxl: You’re right, hazardous hope is not wasted hope. The question is, do people act—or rather react—more against environmental crises out of fear, or only once they are themselves affected directly? Almost all the stories we have heard about climate change up to now are communicated to readers through doomful narratives, and they still don’t make a real difference in changing our mentality.

Jonas: In fact, negative news items often push readers to react in a defeatist way—what’s the point of even trying if the world is going down the drain anyway? This can demotivate and distance people, sometimes to the point of completely disengaging from actual problems. Apart from that, I see a striking parallel to our political culture these days. Populist discourses on risks and threats do make people anxious, but I can’t see how they provide solutions.

Ayushi: So what do we have to lose if we decide to be positive? If anything, hopeful stories can help bring us together. This reminds me of a Twitter initiative called #Ocean Optimism, launched in June 2014. It has spread widely, drawing attention to stories on our progress in solving marine conservation challenges. Since its launch, it has attracted 60 million users. We definitely can’t deny or ignore the power and impact of hopeful stories in our narratives.

Simone: And with hopeful examples, we can emphasize and evoke the regional and global solidarity we so urgently need to address the socioenvironmental challenges humanity faces! Let’s inspire others to act and change their behavior … to keep their spirits up. Until next time!

[The four scholars shut down their computers, left alone with their own responsibilities, mundane routines, and maybe a hopeful glow in their eyes?]