(*All images courtesy of the author.) 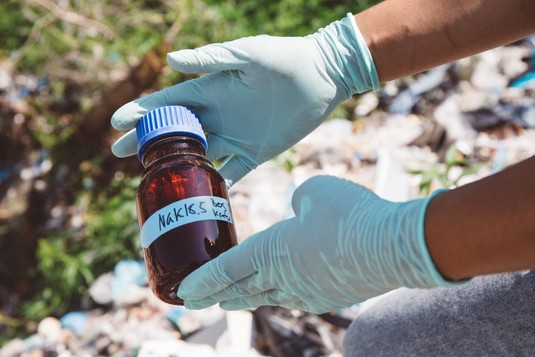 From the field to the laboratory. Collecting samples, called “slurries,” from an illegal waste site in Brandenburg, Germany.

In 2016, a new actor entered the main stage and brought new optimism into the fight against plastic waste pollution. Let me introduce Ideonella sakaiensis. A group of researchers from the Kyoto Institute of Technology and Keio University discovered this bacterium outside a plastic bottle recycling factory in the port city of Sakai, Japan. It was identified as the first bacterium capable of breaking down PET plastic. Prior to this discovery, only a small number of fungi were known to be able to do the same (for other uses of fungi see the first blog post in this series by Maxl Feichtner). Human–nature relationships are often portrayed in negative ways, which can scare audiences away from environmental engagement. However, the way we tell stories is beginning to change: we have begun to focus more frequently on hopeful narratives. 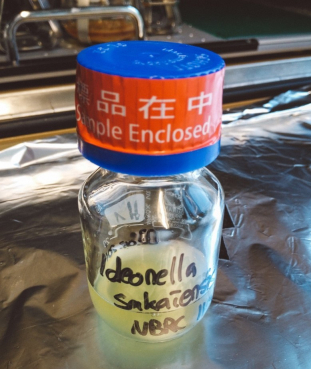 The star of the show: Ideonella sakaiensis. There is still a long way to go before we can implement this science on a larger scale. This little bottle, for example, costs over €400.

We have probably all seen the headlines about how plastic-eating bacteria are going to rescue our planet—they are apparently the key to a “recycling revolution.” An enzyme that promises to save the planet!? Have we finally found a glimpse of hope in all this chaos? Let’s take a look behind the scenes here and assess whether there is reason to be hopeful.

Plastic for Breakfast, Lunch, and Dinner

Polyethylene terephthalate (PET) is an environmental nightmare. The plastic is biologically inert, notoriously resilient, and takes years, maybe even centuries, to break down. Around 480 billion plastic PET bottles are manufactured every year, and after they have served their single-use purpose, many wind up in the environment. One result is the infamous trash vortex in the Pacific Ocean that is currently the size of France (see the final post in this series by Simone Müller). This shows that the bacteria certainly have a lot of PET to choose from!

Plastics are polymers: long, thin molecules made up of repeating monomer building blocks. They have a cross-linked structure in order to build a durable, flexible mesh. Most plastics derive from carbon-based monomers, so theoretically they are a good source of food for microorganisms. But unlike natural polymers—for instance, cellulose in plants—plastics do not generally biodegrade. Here, bacteria and fungi come into play. They usually coevolve with natural materials, constantly coming up with new biochemical methods to help them acquire resources from “dead” matter. Plastics were only invented 70 years ago, so microorganisms simply have not had enough time to evolve the necessary biochemical tool kit to hook onto the plastic fibers, break them up into smaller parts, and then utilize the resulting carbon and other chemicals as a source of energy and growth. Or have they?

Two years ago, the Japanese team found a plastic-eating microbe by rummaging around in piles of waste. Five fruitless years of searching and 250 samples later, the research finally paid off and they isolated Ideonella sakaiensis. The researchers’ discovery of the first bacterium that lives on PET brought hope for a better future. You may think this is the return of an old story, since other plastic-eating microbes have already been touted as saviors of the planet. But there are several important differences here. Firstly, unlike previous PET eaters such as fungi, which were trickier customers, this bacterium is uncomplicated to grow and easy to handle. The researchers more or less left the PET in a warm jar with the bacterial culture and some other nutrients, and a few weeks later, all the plastic was gone. 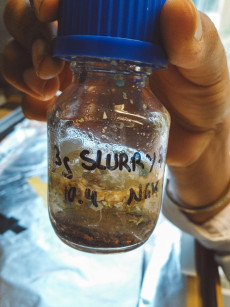 From the field to the laboratory. Collecting samples, called “slurries,” from an illegal waste site in Brandenburg, Germany.

Secondly—and more importantly—the team has identified the enzyme that Ideonella sakaiensis uses to breakdown the PET; this enzyme is now known as PETase. All living things contain enzymes, which they use to speed up necessary chemical reactions. Some enzymes, for example, help us to digest our food by dismantling it into useful building blocks. Without these enzymes the body could not access certain sources of food—for example, lactose-intolerant people lack the enzyme that breaks down the lactose sugar found in dairy products. PETase essentially releases the carbon in PET as a food source for the bacteria. This new enzyme has specifically evolved for this job and literally needs to eat plastic or the bacteria will not exist.

The discovery of Ideonella sakaiensis and the enzyme PETase has naturally caused huge excitement and reignited hope in the fight against plastic pollution. In the past 12 months, scientists from all over the world have used this discovery as a springboard for new developments, many of which have made headline news. For example, while studying the enzyme, UK scientists at the University of Portsmouth accidentally engineered a super enzyme that degrades plastic even more efficiently than the natural enzyme from the bacterium first discovered in Japan. One of the study’s lead authors, Gregg Beckham, explained in a press release: “What we’ve learned is that PETase is not yet fully optimized to degrade PET—and now that we’ve shown this, it’s time to apply the tools of protein engineering and evolution to continue to improve it.” The scientists have already improved the enzyme by about 20 percent but this is apparently only the beginning.

The goal of the research is to find an enzyme efficient enough to break down huge amounts of PET into its components so it can be remade into plastic bottles; true sustainable recycling so to speak. Other enzymes are already used in industrial applications, such as in the production of biofuels, or biological washing powder. Could scientists build on this knowledge and start using enzymes to clean up our mess? And if everything looks so rosy, why are we not starting to see initial practical applications of this technology? 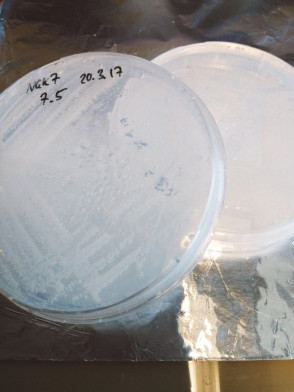 Petri dishes with bacteria cultures ready for DNA sequencing. This is necessary to find enzymes that are responsible for the breakdown of PET.

Let’s take a step back and think about what would happen if we used this super enzyme for recycling. Many experts have dismissed the idea of adding the original bacteria or a genetically enhanced version to the environment in order to speed up the degradation of plastic debris. At the moment, they argue, there are too many unknown side effects for the ecosystem. “A full life-cycle assessment would be needed to ensure the technology does not solve one environmental problem—waste—at the expense of others, including additional greenhouse gas emissions,” says Professor Adisa Azapagic from the University of Manchester. Such caution seems sensible—what if these plastic-eating bacteria turn hazardous? The possibility calls into question whether the industrial-scale production of enzymes and genetically modified bacteria is actually a good idea.

While the modified bacteria used in controlled bioreactors are highly contained, spraying PET-eating organisms onto the waste vortex in the oceans would spread them virtually everywhere. The fact that the bacteria have evolved to degrade and consume plastic suggests this material we rely on so heavily may not be as durable as we thought. If more bacteria began eating plastic in the wild, many “durable” products and structures could come under threat. The plastic industry would face the serious challenge of preventing its products from becoming contaminated with hungry microorganisms. Lessons from antibiotics teach us that we are slow to outsmart bacteria.

Additionally, the structure of PETase is very similar to another enzyme that bacteria use to break down cutin, which is the protective coating found on many plants. Since nobody knows how PETase has evolved up to now, the enzyme was tested on polyethylene furandicarboxylate (PEF), a plant-based alternative to PET. The research team from Portmouth discovered that PETase actually works better on PEF than PET. If we invent an enzyme on steroids that is closely related to an enzyme that can break down the protective layer of plants, will those super enzymes develop further and turn against the “environment”?

We should not worry too much about that at the moment. These enzymes are not really present in nature, yet. We would first need to produce the enzyme and then add it to the PET plastic to degrade it. However, if we have gone to the trouble of collecting PET waste, there are far better ways to recycle or dispose of it. Wim Soetaert, head of the Industrial Biotechnology Centre at the University of Ghent suggests that the use of commercially available biodegradable bioplastics would be a better bet. But the true challenge is making sure that plastic waste does not escape into the environment in the first place. That means improving waste-processing infrastructure—not nearly as exciting as plastic-eating bacteria—should be our priority. Almost a third of all plastic packaging escapes collection systems and ends up in nature or clogging up infrastructure. 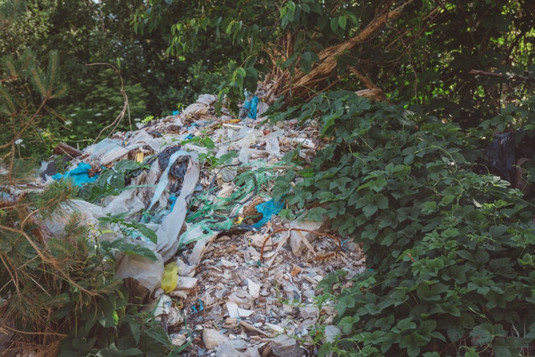 Unsorted waste from an illegal waste site in Brandenburg, Germany, where plants are slowly growing over the waste. This shows the difficulty of collecting waste and preparing it for the bacteria.

This recent study could mistakenly lead many to believe that the danger of plastic pollution can be and is being solved. The fact is, plastic consumption is not declining. In 2000, 300 billion plastic drinking bottles were bought. If policymakers do not impose further bans on single use plastics, this number is expected to increase to 583.3 billion by 2021. Therefore, instead of actively choosing to change our consumption patterns and lifestyles, many might actually interpret these studies as justifying our continued consumption of plastics.

We all know there is no single, simple technical fix for this highly complex topic. However, there is a desperate need to change recycling and consumption systems on a wide scale; reducing the volume of throwaway plastic packaging and making sure plastic is collected and separated effectively. The scientists who work on plastic-eating bacteria are taking their responsibility seriously and providing hope in a desperate situation. Putting all pros and cons aside, an enzyme alone cannot clean up the complex, unjust, and widespread legacy of plastic pollution that we have already created, but it is a sign of hope in the struggle against hazardous plastic waste pollution.