Lives Wasted: Garbage as a Forgotten Dimension of the European “Refugee Crisis”

by Maximilian Feichtner and Theresa Leisgang

A deflated rubber boat is washed up on the eastern coast of Chios. Once the waves have buried it under rocks and it becomes even more entangled with seagrass, you will hardly be able to see it. But for tourists strolling along the beach, this isn’t the only reminder of the boat landings by refugees who crossed Europe’s borders at night. All across the beaches of the Aegean Islands, where tourists usually swim and sunbathe, refugees leave their life jackets, water bottles, soaked clothes—and the boats on which they started their journey to a new life. The waste is what connects both, tourists and refugees, in their everyday life, as both are caught up in a circle of producing and managing waste. Beyond that, the waste is a material trace of countless people’s struggles to survive and escape violent conflicts. It is a trace that tourists and islanders would like to ignore; a trace, however, that won’t disappear by itself.
About one million people arrived on Greek shores in 2015 and the first few months of 2016, most of them fleeing war and persecution in Syria. Since March 2016, when the EU signed a deal with Turkey to halt the flow of migration to Europe, arrivals via the Aegean Sea dropped dramatically. However, possibly due to rising tensions regarding EU-Turkey relations, numbers are increasing again: 4,609 people reached Greece via boat in September 2017 according to the UNHCR. With them, the amount of discarded rubber dinghies, sports boats, and other waste on the islands will likely amount to tonnes. Their waste comes in addition to the already existing refugee boats, carelessly piled up in the hinterland, turning pastures into ship graveyards. What remains undiscussed in the broader public and political debates is the potential environmental crisis that risks adding another level of complexity to the so-called “refugee crisis” in Europe. 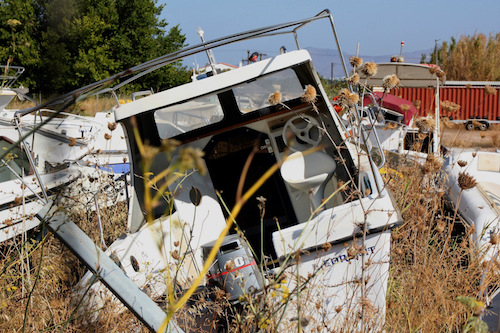 While the Hellenic Coast Guard is in charge of dealing with the refugee boats rescued at sea, there is no comprehensive waste-management system in place on land. In Lesvos, the authorities ignored our requests for information on this topic during our research. Even when we showed up at the town hall personally, the answer was “We are not responsible.” On many islands, locals take on the task of managing waste themselves, with the help of international volunteers such as Moritz Reitschuster, who initiated a beach-cleaning mission in Chios. He mapped all the affected areas along the eastern shore of the island and started cleaning one beach after the other with his team: “Getting [the boats] off the beaches required creative solutions like moving massive rocks, improvised rope hoists, and even some freediving,” the 30-year-old writes in a blogpost for mimycri, a Berlin-based startup that now upcycles this boat material into designer bags.
The garbage left behind by refugees after their arrival on Greek shores poses a serious environmental threat to marine and coastal life on the islands. Nonbiodegradable plastic debris in oceans and on beaches worldwide has been recognized as a danger to marine organisms like fish and birds that get entangled in debris or ingest tiny plastic particles. Piles of life jackets and soaked clothes on sandy beaches put a variety of animals at risk. From a human perspective, however, these visible remnants of mass flight are most of all esthetically distasteful. With the islands’ economies depending heavily on tourism, littered beaches have therefore also become an existential threat to local businesses, as their customers yearn for the pristine landscapes seen in photographs.

“The refugees are gone, don’t bring them back”

Besides reducing the environmental impact, the goal for many volunteers was to support local populations in dealing with this challenging situation. According to Vasilios, who owns a pizzeria in the harbor on Kos island, incomes from tourism plummeted by 80 percent in 2016 after media had brought the “migrant crisis” to TV screens across the world. At the same time that many islanders were left fearing for their livelihoods, they faced a moral dilemma: “I’m not against refugees. In 2015 I said I’d feed 10 people a day in my restaurant. But the next year, I had to close down for a whole season, because I couldn’t pay my staff for the few guests we had in Kos,” Vasilios explains. A guilt-inducing narrative complicates the picture: It is not as if all islanders wanted to get rid of garbage and refugees alike. Vasilios is one of many Greek business owners who are in limbo over helping and suffering from the situation.
When a passer-by reacted very emotionally to their installation on Kos, activists from the organization Sea-Watch gained an insight into how locals still see the issue as threatening. They had collected refugees’ old life vests on the island and put them on bronze figures in Kos town to campaign for EU support for civil search and rescue operations in the Mediterranean. “You make me angry, take this down! First the refugees, then the earthquake, and now this! The refugees are gone, don’t bring them back.” Similar efforts have been made to remove many of the material traces of the 2015 “refugee crisis” and restore the picture-perfect image of the islands. This “out of sight, out of mind” mentality, however, does not address the challenges posed by the recently rising numbers of people arriving by sea. While registration procedures have been developed to efficiently hide refugees from the tourists in so-called “hotspots”—relocating them to container camps in the heartland of the islands—there is still no waste-management system in place that is sufficient to deal with the particular kind of garbage that is now found on many Greek islands. As a result, locals, tourists, and seagulls enjoying the Greek autumn sun probably won’t encounter many refugees, but they might come across piles of discarded life-saving equipment.

There are two more dimensions to the topic of migration and waste: first, refugees might be associated with waste, both metaphorically and materially, and second, this association becomes an act of violence in itself. Iraqi writer Rodaan Al Galidi, who sought refuge in the Netherlands, turned his own dehumanizing experience in Europe into a macabre comparison: “We, asylum seekers, spat out by the war, we are like chemical waste. Nobody wants us. . . . During the time I spent in Europe as a refugee, I never felt like I really am a human being.” While some refugees have to deal with that feeling of being disposable or dangerous to Europeans, many others do not survive their journey at all—so far more than 2,900 people have died in attempts to cross the Mediterranean in 2017, most of them starting their journey in Libya. Ocean currents wash the dead bodies ashore, for instance at the Tunisian town of Zarzis. Outside the town, local fishermen work to give them a burial with at least some dignity in the dunes—even though the graves are located right next to a garbage belt. It is volunteers or local fishermen who actually grapple with the “crisis” that authorities are not able or willing to address.