We’ve probably all been thinking about the weather lately. Our officemates are sneezing, others are coughing, the first one is turning in a sick note. It’s the time of year when weather-related topics start dominating our everyday conversation: the change of the season, the turning of the leaves from deep green to ruby-red, tangerine, or a sun-soaked yellow. Fall is reigning. And let’s not forget, fall is also hurricane season in the Northern Hemisphere. As the difference in temperatures between the North Pole and, let’s say, the South of Italy grows, storms and even hurricanes become an everyday weather phenomenon across Europe and the Atlantic. With the storms, we usually get it all: wind, flood, and destruction—and if we’re not immediately affected by these events ourselves, they are neatly brought to us via our daily news feeds in easily digestible news snippets and images from the Caribbean, the Gulf of Mexico, or Northern Germany.
Yet when, in recent weeks, those of us lucky enough to be watching from our cozy armchair at home, from our office, or while squeezed up close to our fellow commuters on the metro saw images of, for instance, Americans wading waist-deep in mud-brown water, few of us realized, perhaps, that some of these people trying to save their life and livelihood had also been in there waste-deep.
There is more to these floods than meets the unsuspecting eye. These mud-brown waters are not solely the result of an everyday weather phenomenon in the fall in the Northern hemisphere gone a little out of control. Beneath the surface, these waters harbor a story of unresolved toxicity and waste management. Let’s take a closer look. 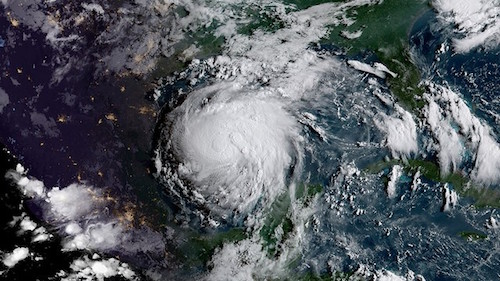 Satellite image of Tropical Storm Harvey in the Gulf of Mexico, 24 August 2017. Image credit: NOAA/NASA GOES Project, available for use under a CC BY 2.0 license.

Hurricane Harvey made landfall in the United States at the end of August 2017. Within hours, the major category-four storm had caused destruction on a massive scale. Across a 200-mile area between Corpus Christi and Houston, Texas, the entire landscape looked like Armageddon had happened: folded-over trees and houses, cars lying on their backs like dead beetles. All in all, only the mere remembrance of what had used to be part of the fabric of people’s everyday lives.
Thousands of people of all backgrounds and colors were displaced or evacuated after the wind had dismantled their homes and mud-brown waters started to close in on them and the ruins of American urban living left behind. Not everyone made it. By mid-September of this year, the confirmed death toll stood at 82, according to Texas officials. Power went out, two major airports closed down. A national football league game had to be cancelled. Experts estimated economic losses at between $70 and $190 billion dollars. Uninsured homeowners will take on a large portion of this. Some communities suffered most from the wind, others from the flooding following the massive rains, and yet others were hit by rivers overflowing with floodwaters heading south from Houston towards the Gulf. While wind and water worked indiscriminately, Houston’s vast population of disproportionately low-income black and brown residents will most likely be hit the hardest.

Flooding caused by Hurricane Harvey. Photo by Jill Carlson, via flickr. Available under a CC BY 2.0 license.

There was more lurking beneath the dirty water than our innocent eyes could behold. When people waded through flooded areas pulling boats or air mattresses with their most precious possessions on board, they probably thought little about what the water might contain—and neither did we while our gaze was fixed on the TV and on them in their plight. Nobody screamed at them to get out of that dirty and potentially toxic sludge.
For Hurricane Harvey may well have brought floods that are not only dirty, but toxic; floods that could seriously threaten human health and the environment of the region. Texas has long been the center of the United States petrochemical industry. Today, it is home to 41 Superfund sites: places designated by the United States Environmental Protection Agency (EPA) as the country’s most contaminated places.
Thirteen of these Superfund sites were flooded by the storm, including the Highland Acid Pit, the San Jacinto River Waste Pits, or the Sikes Disposal Pits. As a result, in addition to destroying people’s homes and livelihoods, Harvey may well have washed in dangerous sediments from these old hazardous waste sites.

The 3.3-acre site of the Highland Acid Pit located in the neighborhood of Highland in Harris County, Texas, for instance, had been harboring an unknown quantity of industrial waste sludge since the 1950s. The EPA believes it to be spent sulfuric acid from oil and gas refining processes. After the hazardous waste contaminated soil and groundwater, the EPA declared Highland Acid Pit a Superfund site. In the 1980s, 22,000 cubic yards of hazardous waste and soil were excavated; the site was fenced in to prevent further illegal dumping and continued maintenance activities and monitoring are ongoing. In the wake of Harvey, the Superfund site, just like much of the rest of the Highland neighborhood became inundated with water, many feet deep. Now people in the neighborhood are worried about what might have washed into their property and houses with the mud-brown waters that flooded both their homes and the Superfund site.

The EPA was slow to respond to the flooding of these toxic waste sites and to the concerns of people living nearby now connected to these sites through a watery life-line. Rather, the institution seems to have been pushed into making a response by the Associated Press. The news agency had sent out teams of reporters to monitor the Superfund sites and then broke the news that some of them were flooded. Afterwards, the EPA confirmed that the sites flooded by Harvey were experiencing possible damage. To this day, the agency is slow in informing neighbors of flooded Superfund sites whether their homes are now contaminated or not. 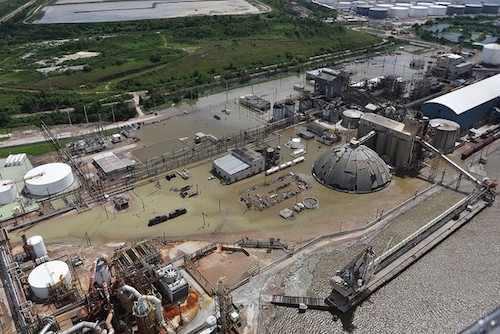 Image from a US Coast Guard flyover to assess Texas ports in the wake of Harvey. Some industrial sites were flooded during the hurricane. Image credit: Coast Guard News, via flickr. Available under a CC BY-NC-ND 2.0 license.

Back in 2012, the EPA conducted a nationwide assessment of the increased threat to Superfund sites posed by rising sea levels and stronger hurricanes, both phenomena attributed to climate change. The study found that of the 1,600 sites reviewed, 521 were determined to be in 100-year or 500-year flood zones. Additionally, nearly 50 of these sites that are in coastal areas could be vulnerable to rising sea levels. In response, the EPA developed an approach that applied climate change science as a standard operating practice in Superfund cleanups. Today, the new head of the EPA repeatedly expresses strong skepticism about the predictions of climate scientists.

Yet, even without engaging in disputes over climate change, these Superfund sites are ticking time bombs. Hurricanes have always hit the Gulf of Mexico region. Harvey itself was immediately followed by Irma in September, only to be soon pushed out of the headlines by Hurricane Nate in October. In 1961, the Highland Acid Pit was flooded during Hurricane Carla. The EPA suspects it caused the fish kill in Clear Lake at the time. It is shortsighted to let these Superfund sites sit there unprotected. Additionally, President Trump has proposed deep cuts to the EPA’s budget and staffing levels. If these come into effect, how much capacity will the EPA have to monitor these sites?
For the people in the neighborhood around Highland, as well as many others living in proximity to the 13 flooded Superfund sites, Harvey’s toxic floods served as a reminder that their lives are intertwined with hazardous waste. Years ago, they might have put the toxic material out of sight. Harvey’s floods brought it back to mind.