We often do not think twice before buying a plastic bag at a supermarket or a shopping mall. It’s bought because it’s needed and discarded after being used for a short while. How harmful can these everyday practices be to our environment? Mumbai’s recent floods definitely have a story to tell in this regard, where these harmless-looking plastic bags acted as a major pollutant and literally suffocated both the drains and the residents of the city.
Mumbai, the sprawling financial metropolis and capital city of Maharashtra, with a population of over 18.3 million people, came to a grinding halt on 29 August 2017 when torrential rains struck the city. Transportation systems came to a standstill as the suburban train services were temporarily suspended. Along with that, many flights were either canceled or delayed because the runway remained non-operational, marooning countless people. Subsequently, the power supply was cut off in various parts of the city to prevent electrocution. This deluge was instantly compared, by media channels and local residents, to the 2005 floods when the state of Maharashtra was struck by high tides which in turn triggered devastating storms and floods killing 1,094 people in the city of Mumbai. But these comparisons in a way were misleading, since statistically speaking the metropolis received just 12 inches of rain during the flooding this year, whereas, in the 2005 floods, 37 inches of rainfall was recorded, thus over three times more than the current scenario. 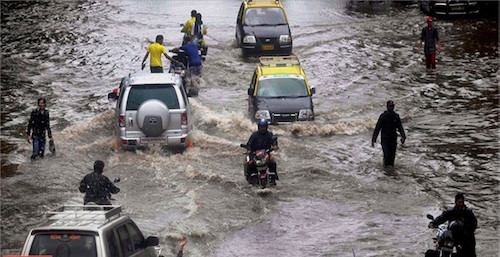 God’s Fury or a Man-Made Disaster?

The question that immediately comes to mind is what then was responsible for the city’s heavy inundation if not the “extreme weather conditions”? To a great extent, the city’s deplorable drainage system bears the blame for bringing everything to a halt. It has indeed been made “deplorable” by the relentless and unregulated dumping of municipal and industrial waste, both by households and nearby industrial units. A case in point is the Mithi River, a critical storm water drain, which divides the city and the suburbs. It efficiently discharges excess rainwater directly into the creeks, other river tributaries, and the Arabian Sea. But, this natural drainage channel has not only been encroached upon but also turned into a filthy sewer in some parts of the city. With the most important drainage system under threat, flooding of the city, therefore, becomes inevitable.
This brings us to yet more pertinent questions: what did we learn from the tragic 2005 floods in terms of disaster preparedness and mitigation, and how far did we come between 26 July 2005 and 29 August 2017? Well, sadly enough, the answer is that we have not learned much from the previous calamitous situations that occurred in Mumbai. After the 2005 floods, the state government and the Brihanmumbai Municipal Corporation (BMC), keeping in mind the immense problem of the dumping of large quantities of plastic waste, decided to initiate a clean-up project for the Mithi River, along with banning these “man-made floating culprits” particularly below the thickness of 50 microns (lightweight plastic bags) in 2006. 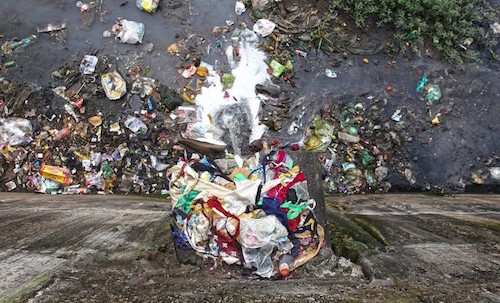 Plastic waste comprises a total of 4 percent of the 8,000 metric tonnes of garbage produced every single day in the metropolis. The ubiquitous presence of this waste carelessly strewn along the roadsides is an eyesore, visible in the form of empty PET bottles, torn plastic bags, pieces of tires, and cement bags, among many other items. This is due to the poor implementation of the ban along with a lack of compliance on the part of the people. Plastic bags are used for almost everything from the wrapping of food and flowers, to transporting food items home from the supermarket, and even to throwing away garbage in them. This “unpleasant” situation is further compounded when other kinds of waste, such as metal, glass, and toxic waste are added to the list. Thus, the unregulated dumping of plastic waste results in massive clogging, as it floats into the drains, slowing down the velocity of the rainwater seepage. And this was quite evident, in the form of repugnant images, once the high tides receded and what was left on the shores and on the roads was our share of waste that the sea brought back for us, consisting of a mixture of domestic and industrial waste.

Is There an End to Mumbai’s Woes during the Annual Monsoon Season?

The blame game, which is very often played after the entire city comes to a standstill due to such reoccurring deluges, doesn’t help the situations of suffering residents either. Who should the blame be passed on to and what is the reason behind the floods: The changing climate and the rising global temperatures which result in such unprecedented rains? Or the urban development projects which have led to the relentless cutting of mangrove forests that dotted the city’s coastline and served as an important element in absorbing water, thereby effectively reducing the impact of torrential rains? Or the lack of open spaces, which is indeed a result of failed urban planning? Or the administrative incompetence of the civic bodies which have failed to perform their task of unblocking the choked drains and desilting the rivers?
The correlation between the solid waste disposal, especially the plastic bags of less than 50 microns, environmental degradation, and recurring urban floods in Mumbai cannot be and should not be disregarded. The metropolis is not only in desperate need of an effective ban on the use of plastic bags, but also increased awareness about their potent connection to reoccurring flood-like situations, and the implementation of proper garbage collection and sewage disposal systems throughout the city.