Hazards in the Amazon: an Environmental History of Oil Production in Ecuador

The omnipresence of oil is so striking in the Ecuadorean Amazon that is has become nothing more than just another factor of everyday life. A short stroll around Lago Agrio, the former epicenter of Texaco’s operations in Ecuador, might illustrate this: after you arrive at your hostel “Oro Negro” with a yellow cab from a company of the same name, you might stumble across a manhole cover depicting the town’s emblematic derrick. In the meantime, countless oil workers in their typical jeans boiler suits walk by. The white-blue busses of “Petrolera Shushufindi” make exploring the surrounding area easy. On the way, it feels like every remote dirt road in the rainforest is accompanied by pipework. Actually, it’s the other way round; there would be no road without the oil pipelines. Sometimes, they are buried alongside the roads or hidden under the grass verge of Shushufindi’s main road, but mostly the huge tubes are in full view and meander all their way over the Andes to Esmeraldas at the Pacific coast. 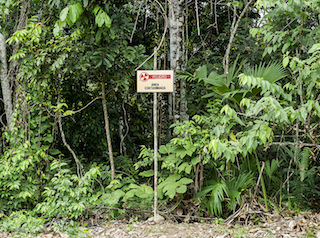 This PhD project in “Environmental Humanities” traces the large-scale transformations triggered by petroleum exploration and production in the Amazon from the 1960s to the 1990s. Crude oil and capitalist exploitation have come to pervade the environmental and social fabric of the entire region through the interplay of industrialization, infrastructure development, agricultural colonialization, and contamination with hazardous waste. Within a few decades, the rainforest that had previously been inhabited only by indigenous nationalities became the deforested and polluted central arena of the Ecuadorean economy. This environmental history embraces a hitherto neglected perspective by integrating oral histories of (former) oil workers. A global history perspective complements this regional scope with an exploration of the international transfer of technology and knowledge regarding hazardous waste management. The oil industry’s operation practices are critically framed as dynamics of appropriation and externalization in an ecologically vulnerable area. This research contributes a case study to the DFG Emmy-Noether Research Group “Hazardous Travels: Ghost Acres and the Global Waste Economy.”