On New Year’s Eve 1987, Gonaïves, an impoverished port town 75 miles north of Port-au-Prince became Philadelphia’s “ghost acre.” That day, an inconspicuous waste barge, the Khian Sea, unloaded 4,000 tons of incinerator ash originating from Philadelphia on the docks of Gonaïves. Amidst political turmoil, Haitian state officials had approved the import of U.S. hazardous waste that Haitian regulations still classified as “fertilizer.” While Haitian officials sought foreign dividends, Philadelphia sought an answer to its seemingly unending and unresolvable waste management crisis. The city was overburdened by the financial costs of meeting new environmental legislation while facing increasingly scarce disposal facilities due to the closing of old facilities and fierce opposition to new ones. In the end, both parties opted to enter the gray market of the global waste economy. Philadelphia relocated its waste to the Global South.

A World of Ghost Acres and Waste Barges: On the Territoriality of Environmentalism and the Mutability of Waste

Gonaïves is only one of many ghost acres around this planet; The Khian Sea only one ship within a fleet of garbage barges. Both sustain industrial capitalism and its premises of continuous growth and profit maximization in the late twentieth century. Estimates are that between 1989 and 1994 alone, member nations of the Organization for Economic Cooperation and Development (OECD) shipped about 2.6 million metric tons of hazardous waste to poorer, non-OECD countries.

The emergence of hazardous ghost acres, such as Gonaïves, illustrates the paradox of modern environmentalism. While in the 1970s industrial nations became internally more environmentally conscientious in their policies and practices, they also commenced relocating their hazardous externalities beyond national borders. The mutability of the concept “hazardous waste” and the national territoriality of waste governance allowed for the materials’ mobility along global, often post-colonial, trading lines. Until the 1990s, an internationally uniform, binding, and enforceable definition of what constituted hazardous waste remained a goal.

Instead, the vast majority of countries around the world had laxer environmental and waste management regulations than a handful of industrial countries, such as the United States. In addition, many of the importing nations, such as Haiti, were under the pressure from agrarian reforms, economic growth and development, or dependent on foreign dividends. Economically, the unequal trade with hazardous waste material could easily be coated as a win-win situation for both sides of the transaction, while environmentally and ethically, it represented a global system of an unequal evaluation of environments and life. 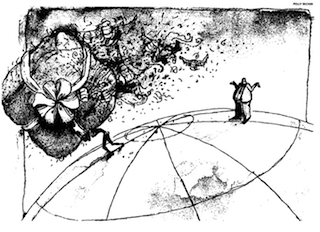 Hazardous Travels. A Ship’s Tale of U.S. Ghost Acres and the Global Waste Economy tells the history of the unequal, international trade with hazardous waste materials from the 1970s, when trading schemes first emerged, until the early 2000s, when the Basel and Bamako Conventions had established international environmentality and return to sender initiatives took off. The project sits at the juncture of intellectual, global, and economic history and the environmental humanities.

Hazardous Travels extrapolates the structures, dynamics, and narratives that produced and sustained the global waste economy while equally being mindful of the materialities of what protagonists broadly define as “hazardous waste.” It seeks to understand how (1) the unequal trade with hazardous waste material could seemingly exist simultaneously on structures of “voluntary exchange” of toxic materiality and what its critiques called “garbage imperialism” and a “re-colonization” of the world through trash and (2) how the territoriality and environmentality of waste intersects with geographies of power and inequality on a global scale.

Building on and expanding from the obvious global environmental (in)justice issue at stake, the project also uncovers the trade’s entanglements with (a) political, economic, and social practices of externalization, (b) the territoriality of waste and its governance within a closed planetary system, and (c) the importance of environmental affects for comprehending the above two. Finally, the project also offers insights into environmental journalism and campaigning, waste management, and urban history.

... of U.S. Ghost Acres and the Global Waste Economy

Hazardous Travels tells the history of the global waste economy through the prism of the Khian Sea and from a United States in the world perspective. It pays tribute to the Khian Sea as flagship story of environmental journalism and activism and the United States as both the largest producer of hazardous waste material globally, and one of the key actors opposing a successful international governance on hazardous waste. From the United States, the story spans as diverse and far as Panama, the Bahamas, Guinea-Bissau, Haiti, Sierra Leone, West-Guinea, Italy, Norway, Canada, Mexico, and Switzerland. While the narrative commences with the Khian Sea’s departure from Philadelphia in 1986 and adjourns with the return and disposal of the ash in 2004, it is mindful to the larger and older trajectories and path dependencies of the issues involved.

A Global Study in the Environmental Humanities

Hazardous Travels is a global study in the environmental humanities. It engages with both, the narratives, concepts and structures, as well as the materials that sustained the global waste economy. Beyond the philosophical definition of hazardous waste as that which may be toxic and harmful to human health and the environment, its material traits and hazardous qualities challenge research in two important ways. Hazardous waste evokes (1) a full host of, primarily negative, emotions (environmental affect) which inform waste management and practices of externalization in important ways, and (2) hazardous time and space regimes non-congruent with the dominant anthropocentric one. Hazardous waste may be carcinogenic or take the form of endocrine disrupters which alter our bodily and that of future generations in fundamental ways. The time until neutralization may be decades, centuries, millennia even and the challenge of waste disposal one of many generations into the future. When dealing with hazardous waste as an object of study, scholars must be mindful to deep time as well as longue durée and understand the body as a site of history as much as a source of environmental affect.

Hazardous Travels is the story of the global waste economy as a system of global externalization mechanisms through which one country dumps its toxins on another. These externalization mechanisms are integral part to an economic system that sustains its growth through the appropriation of cheap ‘waste land’ – or ghost acres as we call these lands in our research group – all around the world. In the end, the system creates a global geography of unequal valuations of life.