Beyond Denial and Anger: How Journalists and Scientists can Collaborate for Better Communication 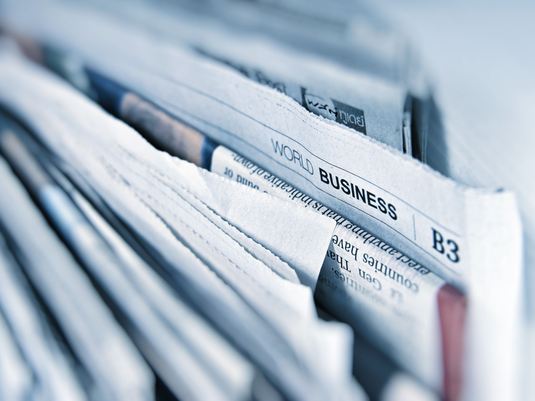 In the early months of 1999, the UK press traded headlines for and against the use of genetically modified crops. A circulation war had escalated to ecstatic heights, peaking in February with the Daily Express’s headline “MUTANT CROPS COULD KILL YOU.” Questioned a few months after the frenzy was over, in the cold light of Parliament, the editor admitted the claim was “probably racked up to make it a good headline.” It was, he said, “probably pushing it quite far.”

Scientists can find themselves carried on the crest of a wave of stories only partly connected to their research. The Express’s headline was based on a paper discussing the unproven possibility that genetic modification of food crops could spread antibiotic resistance to human pathogens, but the paper’s choice to cover it as part of an anti-GM campaign resulted from competition with other outlets like the Daily Mail.

Scientists misquoted in the press can feel frustrated at the way they are misunderstood, while journalists may feel scientists are over-protective of their work and unwilling to entertain alternative interpretations or trust journalists’ storytelling skills. Some scientists decide they would prefer not to engage at all when they experience it themselves or see what a colleague has gone through.

Questioned about incorrect and misleading coverage of climate change—mostly through opinion columns—the UK’s Daily Telegraph argued its journalists deal with “impenetrable gobbledeygook from scientists who appear to have no inkling that their case is incomprehensible to most members of the public.”

Working as deputy editor for Carbon Brief, a fact-checking blog focused on climate science and policy, I saw both sides of the argument. Press coverage is still a primary means for scientists to communicate their work to large audiences, so it is worth examining how the two professions can work better together.

Scientific training takes years and comes with its own vocabulary, writing style, and means of producing knowledge. Communicating findings in ways that catch imaginations and inspire curiosity involves peeling away layers of archaic language, caveats, and data tables to find a story. Journalists are often on short deadlines and increasingly face pressures like story quotas. Working with sometimes impenetrable prose, journalists can misunderstand studies or take them out of context to fit a specific narrative or editorial line. Then, an editor slaps on an attention-grabbing headline, taking the piece even further out of context.

Audiences encounter news and opinion pieces that can take findings out of context or report research as though it contradicts previous work rather than creating understanding about how research builds on previous work more often than it revolutionizes a field. This can create real problems. Doctors report patients asking for drugs that are unsuitable or not on the market yet on the basis of articles in the press. At best, more information about treatments can help patients advocate more effectively for themselves. But when that information is misleading, the effects can be seen in cases like the global rise of measles cases after extensive press coverage of a now-disproven single paper linking the MMR vaccine to autism.

The problem is not entirely down to journalists. University press offices, for example, can exacerbate the problem by exaggerating findings to attract attention. A 2014 study found that a lot of erroneous reporting—from suggesting studies refer to humans when they were actually carried out on animals to exaggerating the scientists’ confidence in their results—starts in press releases. They advised researchers and press officers to collaborate more closely when publicizing research.

Scientific institutions have attempted to help ease the job of ensuring scientists’ words will not be taken out of context. A few years ago, the American Geological Society produced a list of terms that audiences are likely to misunderstand in a scientific context. Words like “confidence” connote certainty to non-scientists, while the better tactic might be to explain that results fall within an acceptable range. Institutions also offer media training, with advice on how to deal with journalists—like making sure comments are easy to follow and following an interview with a list of the key points covered. 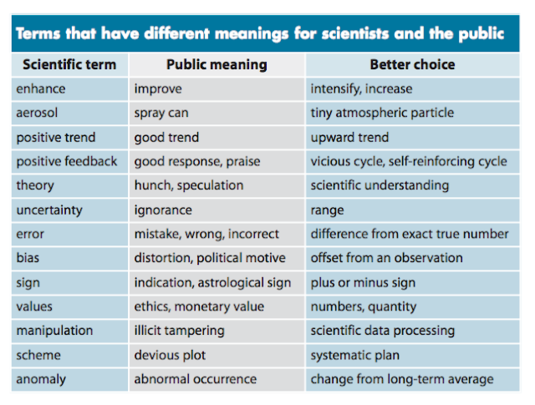 Most commonly misunderstood words by the public. Source: A table from the article “Communicating the Science of Climate Change,” by Richard C. J. Somerville and Susan Joy Hassol, from the October 2011 issue of Physics Today, page 48

For some scientists, especially a new generation comfortable with new media channels like Youtube and Twitter, such subtleties are second nature. Although some stigma exists within the field, becoming “too popular” is less likely to draw disapproval than in the days when Carl Sagan encountered censure from his colleagues for creating wildly popular programming. But a prominent public profile is not necessarily attractive, however, especially for scientists who are not white men. Women in science frequently receive sexist attacks on social media. Science Magazine’s list of the top 50 scientists on Twitter is notably male and pale.

One model that offers a potential alternative to staying in silos and feeling frustrated is more collaboration between scientists and journalists. Some institutions are providing a framework for closer work between the two professions. The BBC’s #5050 project is creating a database of women experts and providing training to offer support. The idea is to increase the number of women speaking on a range of subjects, for example.

Climate Matters in the Newsroom provides another model for collaboration. The initiative provides data packaged accessibly on questions such as the link between climate change and extreme weather and helps journalists to connect to scientists who are willing to provide background information and quotes. Climate Matters also works with another kind of science communicator: television meteorologists. TV weather presenters are often the only scientists that audiences have regular access to, and the public tends to like and trust them to a truly enviable degree. Their magic combination of scientific understanding and trust makes them potentially extremely effective climate science communicators.

Sitting opposite a scientist changed my writing. At Carbon Brief, I would work sentences back and forth with our science editor, who also had a PhD in climate science. Faced with fact-checking a headline like “Is ‘global cooling’ on the way? Lake sediment proves sun cooled earth 2,800 years ago—and it could happen again soon,” we’d get to work contacting the scientist whose work has been taken out of context—in this case conflating regional changes with global atmospheric shifts.

Together, I’d write what I hoped was a snappy summary and she’d point out my inaccuracies, or I’d suggest ways to make carefully-caveated sentences sound more immediate. Our collaboration was a fascinating exercise in comparing two very different kinds of training, finding interesting stories that did not sacrifice accuracy. Talking to scientists about their work can also reveal far weirder and more compelling stories than any misquote or exaggeration. Behind the dry language of a scientific paper lie adventures such as sitting alone on an ice floe for months to count penguins or the role of the science the Seminole and Miccosukee tribes carry out in Florida’s Everglades in preserving water quality standards.

Journalists, until recently, were not natural collaborators. The idea of working with another newsroom was, until recently, anathema to most editors and journalists used to competing for stories. But reduced budgets and staffs have led to co-authored work such as the Panama Papers investigation. Journalists wrapping their heads around complex scientific stories could also look outside their profession for people to work with. Collaborative projects are not appropriate in every case, because science must be accountable as well as understood. But working together could offer one way to produce new kinds of stories, as well as reassess the sometimes-rigid practices that can lead to confusion, frustration, and misunderstanding.