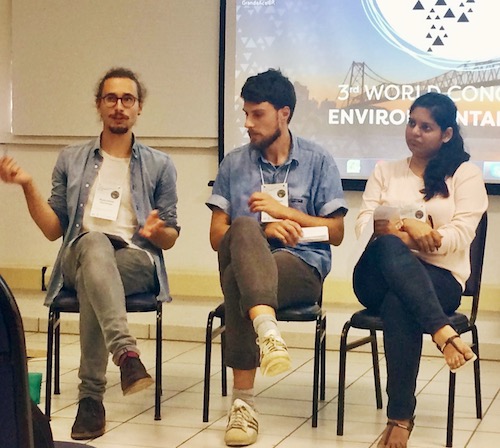 Every five years, environmental historians from literally all over the world get together for the World Congress of Environmental History (WCEH). This year, the 3rd WCEH was held in Florianopolis, Brazil, at the green campus of the Universidade Federal de Santa Catarina from 22 to 26 July 2019.  Three quarters of the Hazardous Travels Team, namely Ayushi Dhawan, Maximilian Feichtner, and Jonas Stuck, had the pleasure to mingle with scholars from over more than 40 countries, listen to inspiring talks, and present their own research.

Being one of the youngest panels there, the HazTrav team rocked the seminar room Sala Goiabera with ther presentations on “Toxic Encounters: Hazardous Waste Regimes in the Global South and Global North” and attracted up to 20 renowned audience members. Ayushi Dhawan kicked off the panel with her presentation on the life and death of a big cruise ship, debating ”India’s Shipbreaking Business (1982-2012), Emerging Economies, and the ‘Right to Pollute’?“ Maximilian Feichtner followed up with a talk about leaking oil pits and double standards in the oil industry's waste disposal with “Toxic Ghost Acres – or the Dynamics of Disposing of Oil Production Wastes in the Ecuadorean Amazon in the 1970s and 1980s.” The grand finale was Jonas Stuck's innovative approach to the German border with his presentation “Toxic Division? The Hazardous Waste Trade between the Two Germanys, 1970-90.” May-Brith Ohman Nielsen from the University of Agder - Kristiansand in Norway did a great job in hosting the panel and moderating the experimental discussion: before opening up for individual questions, the presenters mingled with the audience in three groups and had a more intimate debate. The “RCC discussion model” was quite a hit!

The week in Florianópolis had quite a lot to offer: great keynotes by the Colombian queer ecologist Brigitte Baptiste and the US-American Environemntal Attorney Robert Bilott, networking at the RCC book stand, great food and drinks during the breaks, hikes along the beautiful beaches of the Santa Caterina Island, and so much more. During the closing ceremony, it came as a pleasant surprise that Maximimilian Feichtner was awarded the SOLCHA Prize for Best Paper on Latin American Environmental History that transcends a National Perspective for his above mentioned talk.